It was the future and I was watching it happen. People were

I watched a lot of TV.

I came downstairs to eat breakfast before school. It was about 9am. I used the drawer handles to climb up and sit on the counter, which I did sometimes but was usually chastised for, but mom was very quiet. I sat there and looked up at the TV just as the second plane crashed into the second tower. 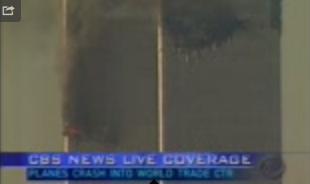 I knew this was a big scary thing that never happened here in America, and that lots of people were dead. Even the people on the news, who usually sounded really boring, seemed confused by what was happening and where the plane came from. They were saying that it had to be people who hated America and wanted to kill a whole lot of people..and they did it. The bad guys won.

My mind started to race and I felt my heart beating really fast. So the people who did this really hated America, right? That's why they did this in New York, because when you think of America, that's one of the first places that comes to mind. Well what other place do you think of? California, right? It's beautiful here and it's where all the movie stars are. Well if you want to hurt a country you go after the goverment, yeah? The government here is the Capitol. That's where I live.

Well we don't have big tall buildings like New York does, but we have the Capitol building where the government is, and these people have planes, and in wars- this is the start of a war, right? Yeah so..in wars countries drop bombs on each other. They kill people by dropping bombs from planes and stuff explodes and people die. Big explotions. If the capitol blows up..how close do I live to the capitol? Downtown? How long does it take to drive downtown? Would my house burn? Am I going to die??

There was lots of smoke coming out of the towers on TV. There was fire inside. There had been important people working inside, and now lots of them were on fire and dying. There were other people watching their friends die, and trying to get out. Those people weren't soldiers, they were just at work. They thought they were safe.

I wasn't safe, either. I didn't want to catch on fire.

This was the last year of my childhood.